Photographs capture a moment in time, a moment that begins evaporating just as soon as the shutter releases.  Be it seconds, minutes, years, or decades later, that photograph cannot be recreated, because the moment is gone, replaced with the next, which itself disappears into another.

A photograph provides a window into the past.  And, sometimes, the really great photographs intrigue you; they pique your interest to the point that you just want to see and understand what was going on outside the frame, or in the moments just before and after the photo.

Take this photograph, memorialized as ‘Store Going out of Business – Lowell, Mass.’ in the Library of Congress’ Prints and Photographs Collection.  Jack Delano, a 20th-century American photographer known for his work with the Farm Service Administration, captured the iconic photo in Lowell in January 1941, as the mills were closing, and as downtown stores were failing.  Its story, captured in one of those unforgettable, moment-in-time images, recalls a time when Lowell was in decline, with one-third of its citizens ‘on relief’ as the city was losing the textile industry that had defined it for much of the preceding century.

There are three quick tips that anyone can use to unlock the secrets of old photos.

There’s no name on the store going out of business, but there are some names on neighboring storefronts.  H.P. Reeney is the easiest to read; his name is prominently displayed on the storefront to the right.  If you look to the left, you might recognize that lettering, and find yourself remembering those end-of-summer trips to the shoe store each year as Labor Day approached. 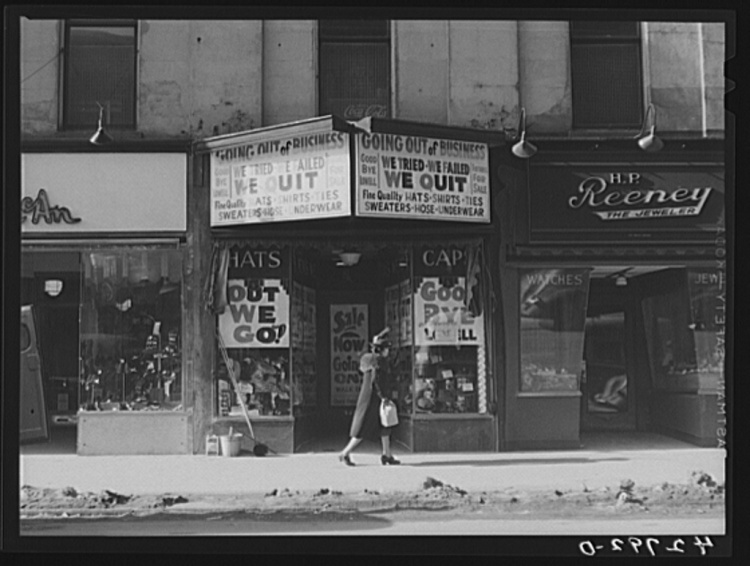 Okay, now we know the names of the neighboring stores.  Next:

2. Look to see where those stores were located at the time of the photo.

Since Thom McAn was a pretty popular chain, and may have had multiple locations – even as early as 1941 – it’s best to start with H. P. Reeney.  With a quick search of old newspapers, it’s easy to find a mention in the local paper.

And, with that, we know that H. P. Reeney was located at 65 Central Street just a few months before Jack Delano snapped his photo.  But, where was Thom McAn?  Back we go to the newspapers from 1940.

So, if we’ve determined that Jeweler Reeney is at 65 Central Street and Thom McAn is at 69 Central Street, that must mean that the closing mystery store is at 67 Central.

What can we find with a search on 67 Central in 1940?  Almost nothing.  Sometimes, the trail goes cold.

There was this photo, of a store moving into 67 Central Street, later that year, but it’s pretty clear in the original photo, with the woman’s winter coat, and the small snowbanks lining the curb, that it’s earlier in the year.  This is a photograph of the store that replaced the closing store.  But, the photo does give an idea of what the interior of the store going out of business might have looked like.

At this point you have to:

So, the closing store didn’t have much of a presence in the local papers, which probably explains why they were giving up, if they didn’t quite prove that they tried at all.  With no further mention of the address mentioned in the local papers, I went to city directories, which showed that Essex Hat Stores was in that spot in 1940.

The mystery behind Jack Delano’s old photo is solved, but, as is the case with historical-based research, a new one emerges.  What does the site look like today? What type of store occupies the site?

Well, the answer is: it’s gone.  The block that once sat on the corner of Central and Market streets is long gone, demolished some 40 years ago so that a large brick apartment complex could be erected in its place.  Today, 67 Central Street looks like this: 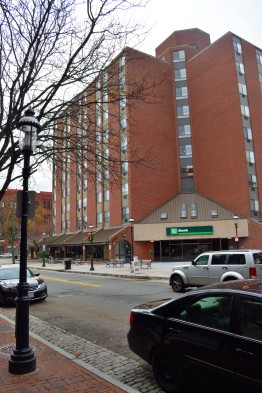 Photographs d0 capture a moment in time, before that moment disappears forever.  In this case, Jack Delano captured Lowell as it suffered the demise of the mills, 75 years ago, and at least 35 years before Lowell began to enjoy the great recovery which brought the renewal (and investment dollars) so prevalently visible along today’s city streets, and in the city’s renewed and restored architecture.

Want to see more posts on unravelling the mysteries found in photographs?  Check these out: