The memory of the Sweetwater Hotel lives on in the name of Sweetwater Avenue, off Bedford’s North Road.

If you were to travel Bedford’s North Road in, say, 1908, you would see, as you progress into the town’s northern reaches, a road named Sweetwater Avenue.  Sweetwater Avenue led to Dr. William Richardson Hayden’s Sweetwater Hotel, built in 1897 near Fawn Lake, itself well-known for its ‘restorative properties’ that were said to cure many stresses and ailments.

Dr. Hayden, well-known in the Bedford area as the president of the New York Pharmaceutical Company, had built the Sweetwater Hotel on the site of the former Springs House, which had been constructed about 50 years earlier, in 1843.  The fame of  the ‘sweet water’ found in Fawn Lake dates back many years before that, however.

In Katharine Mixer Abbott’s 1908 book, Old Paths and Legends of New England, the magic of Bedford’s sweet water is traced back to an ‘Indian’ legend, which told of the Nipmuck Indians, who once inhabited the forests surrounding the three mineral springs that were eventually constructed into Fawn Lake.  As the story goes, the Nipmucks had captured a young pioneer and tied him to a tree.  Before the pioneer could be put to death, however, Sweet Water, a young woman well-known not only for her beauty, but also for being the daughter of Chief Mancomee, took the brand warming in the embers of the bonfire and cried:

“The great spirit is angry.  The pale-face shall not die, unless Sweet Water dies with him.”

Soon after, Mancomee spared the man, and unbound him.  He eventually married Sweet Water and became a counsellor of the tribe.

Several generations later, in 1843, the Springs House rose near the site.  The Springs House, later the Hotel Sweetwater, quickly became an attraction for city-dwellers seeking relief from their ailments and stresses.  Access to it quickly became much easier with the construction of the Billerica & Bedford Narrow Gauge Railroad in 1877.  With the increased revenues, Dr. Hayden built out the hotel, and added a pharmaceutical laboratory there in 1892, capitalizing on the fame of the water’s restorative powers.

With its well-appointed dining rooms,  the Hotel Sweetwater offered afternoon tea for ladies, and steam-heat to keep its guests warm.  The hotel boasted a ballroom, billiards, a pool, and even a bowling alley.  The Sweetwater’s grounds included a nine-hole golf course.  It even had a garage that offered gasoline and oil, in 1911, as automobiles were just emerging on town roads. 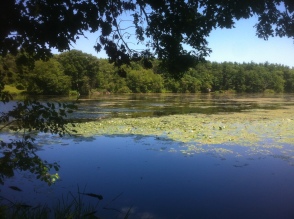 Dr. Hayden died in 1903, at the age of 82.  Several years later, in 1917, the hotel was demolished.  The pharmaceutical laboratory built on the site was converted years later, in 1985, into condos now known as Sweetwater Place.  Today, Fawn Lake remains at the site of the former Sweetwater Hotel, a twelve-acre lake framed by an additional 25 acres of forests and walking trails.  The memory of the Sweetwater Hotel lives on in the name of the road leading to the Lake, which intersects with another road, named after Dr. Hayden.  The descendants of Dr. Hayden sold the lake to the town of Bedford, Massachusetts in 1978.