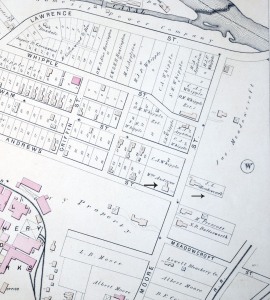 Decidedly more rural in the years before the construction of Sacred Heart Church, the land that would eventually sit under the parish’s buildings was then owned by the Meadowcroft and Andrews families.

Moore, Andrews, Whipple, Meadowcroft:  If you spent a good span of your childhood years in Lowell, Massachusetts attending school or church at Sacred Heart, all of these names will be familiar to you.  The streets closest to Sacred Heart carry those names, which date back to the decades before Sacred Heart’s founding when the area was much more rural, and formed the southern edge of the city.  But, who were they?  And how did Sacred Heart come to be built in South Lowell?

On June 7, 1880, James Meadowcroft owned precisely 39 acres of land on the southern side of Moore Street.  Some was tilled; some lay  fallow.  Meadows formed some of his land; the rest was forest.  Meadowcroft was a wealthy man.   He also owned the farming implements, machinery, and livestock to sustain a healthy income.  He had year-round help in running the farm.  And, his farm had produced hay, milk, butter, eggs, and potatoes during 1879.

By no means a young man at 63 in 1880, James Meadowcroft was what that age called a gentleman farmer.  He had retired from his profession as a blacksmith.  His wife, Alice, 60, was just a bit younger.  Both had been born in England.  He had become a naturalized citizen in 1852.  By 1880, all of their children had moved on; only a nephew, George Green, lived with them.  He was 48 and without occupation.  A servant named Sarah Moody saw to their needs.

Some years before, James Meadowcroft had cut out a small portion of his land for his oldest son, John, who lived in a home on the western edge of his Moore Street property with his wife Bertha.  John made his living as a real estate agent.  His other three children had grown up and moved on.  To steal a term from a much later age, the Meadowcrofts were ’empty-nesters’ and were probably looking to move on from the Moore Street property they had occupied for at least three decades.  Across the street in the former home of William Andrews, a marble worker, the Litchfield family had just moved in.  Paul Litchfield, 46, listed his occupation as a mill owner in 1880.  He and his wife, Sarah, raised their family of five children on the future site of the Sacred Heart School, who ranged in age from 6 to 22 years old.

Moore Street was still a dirt road in 1883 when church officials approached the Meadowcrofts about selling their land to the church.  The street had at least been macadamized (paved with gravel) by 1891, when they approached the Litchfields about the sale of their land to allow for a parish school to be built.  The area had remained very rural and quiet, but the Catholic population was growing in what was then the city’s southern extreme.  By some accounts, the Catholic population in South Lowell had reached 3,000 by that time.  A church was needed, and St. Peter’s was thought to be rather distant for those living in the Bleachery and Ayers City sections of Lowell.  Some folks even came up from Wigginville, just down Lawrence Street – which, at that point, hadn’t yet been annexed from Tewksbury (and wouldn’t be until 1906). Sacred Heart Church, just a few years after its completion – 1900 (From A City of Spindles – Lowell Trades and Labor Council)

Until Sacred Heart Church performed its first mass in 1884, those 3,000 Catholics remained assigned to the St. Peter’s Church district.  Ground was broken for the new parish on Eastern Sunday, 1884; church fairs were held to raise funds.  Construction progressed rapidly.  Father Joyce, an Oblate father and an assistant in the Immaculate Conception Parish, oversaw the founding of the parish, the buying of its land, and presided over the dedication of its basement, on August 10, 1884 by Archbishop Williams, after a solemn high mass was said by Rev. Father Lefevre of Montreal, the provincial of the order.  While the basement was used for services, the church proper was constructed.  Its corner-stone was laid in June 1896. 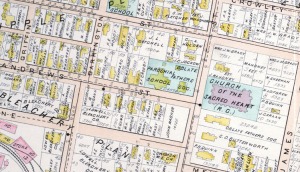 The Sacred Heart area, some 20 years later, in 1896. The area has experienced significant development, notably along the western side of Andrews Street and the south side of Moore Street.

The first Sacred Heart School building was constructed to accommodate some 400 students – though, initially, the school had far less.  It opened for the 1892-93 school year.  By 1899, 250 students attended.  Opposite the church, it fronted Andrews Street on one side, Moore Street on the other – though it was still separated by a single building, which was eventually razed and replaced in 1909 by what later became known as the “new old school” that burnt to the ground decades later, in 1967.  As the school neared completion in 1892, plaster was applied to the woodwork in each of its eight classrooms, each 32 by 24 feet.  Each classroom had its respective cloak room, measuring 4 feet by 18 feet.  Lots of attention was paid to the woodwork, to the doors, and to the circular transoms above each.  As the school was completed on its ‘garden lot’, a contemporary writer commented that the setting was ‘very quiet’, ‘surrounded by beautiful trees’ and had an open field in front of the building that was ready for construction to support the parish’s expansion.