If you were to visit Lowell, Massachusetts before . . . say, 1890, you would not have met many men walking about the city named João or Manuel.  The Portuguese began arriving en masse in New England in the late 19th century and had established, by the first decades of the 20th century, sizable communities in Rhode Island and Massachusetts.  Most of these Portuguese hailed Madeira or the Azores, island possessions of mainland Portugal.  The three pages attached below are taken from the Lowell, Massachusetts City Directories for 1884, 1894, and 1910.  The surname Silva, one of the most common Portuguese surnames, does not appear at all in the 1884 directory.  Just ten years later, in 1894, ten Silva men are listed in the Directory.  And, by 1910, this number had grown to 42 individuals with the surname Silva.

If you’re among the roughly 1 in 20 Americans who today claim Portuguese ancestry, you’ve likely discovered that Portuguese genealogy presents some challenges.  Records are not as widely available as they are for other Western European countries, and often are not translated from Portuguese. Additionally, vital records (birth/baptism, marriage, death) are frequently church records whose form and content vary widely depending on the time and region of the record.  As an added challenge, many Portuguese arriving in the United States during the late 19th and early 20th centuries changed their names either to appear more American or so others would be more able to pronounce their names. In my own research, I’ve found Machados who became Marshalls and Pereiras who became Perrys.   To add to the challenge, first names are often translated too. José becomes Joe and João becomes John.  There’s some evidence of this in the Lowell City Directory listings above, where many of the Silvas use Anglicized names like Joseph, Frank, John, and Louis.

It took me what felt like forever to find my grandmother’s Machado family in the 1920 U.S. census and with good reason.  When I finally found them, they were listed as an Irish family with the surname “Marsh”  (Below, see lines 54-57.)  Sometimes, the errors recorded in census records tell you more than the true information that was recorded.  From this record, I can get an idea of how my great-grandfather’s pronunciation of “Machado” sounded to a native English speaker from Massachusetts.  How she ever ended up listing them as English speakers from Ireland though, I’ll never know.  They were light-skinned Portuguese folks with light eyes, but likely spoke broken English at the time. 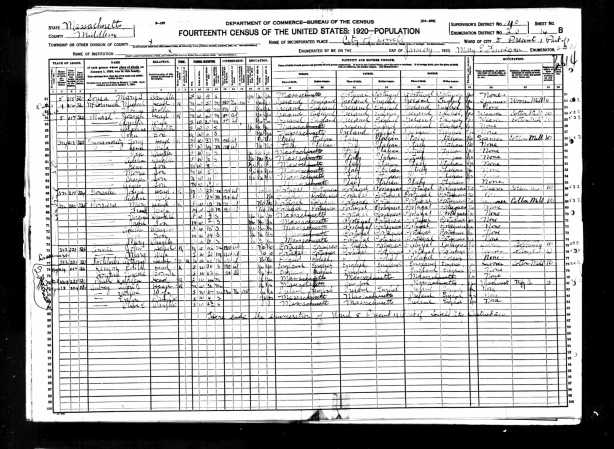 Admittedly, the challenges of Portuguese genealogy are many, but the Portuguese people have a rich history. Who wouldn’t want to learn more about one’s ties to a culture that gave us some of the world’s great explorers, e.g., Henry the Navigator, Vasco da Gama, Ferdinand Magellan, as well as fellow present-day descendants like Tom Hanks and Meredith Vieira? The Portuguese even had their own crazy set of royals (which they overthrew during the Revolution of 1910).  And Portuguese history is full of interesting stories that are not well-known in the English-speaking world.  Perhaps one of the most curious tales to have occurred during the nearly eight-century history of the Portuguese monarchy is that of the legend of Pedro I.  The legends goes that Pedro I was so distraught that his wife, Inês de Castro, had died before he became King that, when he eventually ascended the throne in 1357, he exhumed her body, put her upon the throne, bejeweled and dressed in a rich gown, and then required each of his new vassals to kiss her hand as a show of fealty to their new queen.

When I first started researching my grandfather’s family, I vaguely knew that he had come from Madeira, a Portuguese island about 600 miles from mainland Portugal and 400 miles from Morocco that had first been settled by the Portuguese about a decade after Henry the Navigator had sponsored a voyage there in 1419. When I later read his obituary, it rekindled a memory that he had been born in its capital city of Funchal.  I also knew his parents names had been John and Frances.  With his birthdate, it was a good start.

While genealogy records seem to abound for ancestors from the British Isles, Portugal’s ancestral records are relatively unexplored. Even a few years later I started researching, online resources were still fairly limited. There were a few people in Portugal willing to help out through the internet, but with the foreign currency issue (how to pay them), and the vague unease associated with internet transactions, it seemed more trouble than it was worth.  I tabled further research for a while, content to know that my ancestors came from Madeira, from its capital city Funchal – until I was fortunate enough to land a temporary work assignment in Portugal’s capital city, Lisbon. In April 2004, I arrived in Lisbon to work the assignment, and to perfect the Portuguese I had been learning in Brazil.

Even from Lisbon, Funchal is still a two-hour flight.  But, by 2004, Portugal had begun to put some of its genealogical information online. Already armed with my grandfather’s date of birth and his birth city, I requested his birth record from the government-run website. A few weeks later, the baptismal record arrived.  And, as I opened it, I thought ‘what luck!’ The certificate included not only details around his birth, but also details about his parents and even grandparents. And, it showed that my family had come from an even smaller village on Madeira a generation earlier, called Caniςo.

Even in 2004, a few well-planned online searches for Caniςo popped up some very specific hits, including one to a distant cousin who had, several years earlier, researched the family back almost 500 years to the early 1500’s. A quick email, and a day later, he had sent me an Excel spreadsheet listing out every ancestor and cousin in the family, their baptisms, marriages, and even how they were all related to each other. I later found a book indexing all of the Madeira records and tied out all of the records and verified his accuracy.  These days, much more is available online for Madeira, and you don’t really need a book only available in Portugal.  You can research marriages, baptisms, passport applications, and more at the Madeira Archives website at:

At this point, the website and its indexes are only available in Portuguese, but with the knowledge of a few terms, you should be able to navigate the website quite easily.  From the homepage above, click on “bases de dados”.  For marriages, search “casamentos”.  Baptisms and Passports are the next two links in Portuguese words that will look familiar to English speakers.

I still stare sometimes at the earliest names on that list.  When I look at the earliest, a direct ancestor who was born in 1535, I  wonder what his life was like all those years ago on Madeira, and just how many descendants he has in New England, the United States, and in the many other regions of the world.  In years, 475 are a lot.  I don’t have his date of death (those seem to be less consistently recorded than dates of baptisms and marriages), but it’s probably a safe bet that he had long since passed away before the Pilgrims first stepped on Plymouth Rock in 1620.

28 thoughts on “The Challenge of Researching Portuguese Ancestors”