The Grand Fires of 1904 – Lowell, Massachusetts and Fire’s Constant Threat 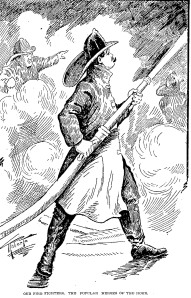 Fire was a danger never far from the minds of our ancestors at the turn of the last century.  In 1904, Lowell, Massachusetts, then a manufacturing city of 95,000 residents and the 39th largest city in the United States¹, suffered a record-setting year in terms of fires, alarms, and losses suffered.  Before the year would end, just over 700 alarms were called into the Lowell Fire Department; five of those alarms included a fatality.  The year’s largest fires claimed Lowell’s iconic Huntington Hall and one of its largest department stores – O’Donnell & Gilbride’s.  The Old City Hall – dating from 1830, St. Patrick’s Church– the city’s first Catholic church, and even the Central Fire Station were nearly lost as well.  Through this post, and a series of posts to come, I will cover each of the grand fires of 1904 in detail.

All five of the city’s fire-related deaths during 1904 were women and girls who had passed too closely to open flames in an age when hemlines swept floors.  Mrs. Celia Green died in February after stepping on a match.  Two others, Mrs. Rose Churchill and Miss Alice Sullivan, just four-years-old, died after passing too closely to burning leaves.  Another woman, Mrs. Marion Ainsworth, died on September 23 after suffering from burns caused from her oil stove the day before.  The last, Mrs. Ellen Leary, 75, died on Christmas Eve after her clothes caught fire from a falling oil lamp.

What’s surprising is that there were not more far more deaths in Lowell.  707 alarms were called into the Lowell Fire Department in 1904, and those were fairly well-distributed throughout the year, averaging about 60 alarms each month.  What caused these fires?  Chimneys were the most common cause in 1904, constituting about 17% of the alarms for that year.  Grass fires were a distant second at 7%.  Improper use of matches resulted in a good number of calls to the fire station during that year, as well, and resulted in about 5% of the year’s alarms.  However, the causes of the alarms truly were varied – ranging from sparks setting a roof on fire to failed attempts to thaw frozen pipes.  A wooden spittoon was blamed for one fire and rats’ nests in wall partitions were blamed for five others.

1904 began with three disastrous fires before January was even half over.  The first, on January 9, sparked in the Odd Fellow’s Building on Merrimack Street, and threatened to spread across a narrow alley and burn down Lowell’s Old City Hall Building, even then a valued part of Lowell’s early history.  The Fire Department responded quickly and effectively and protected the Old City Hall Building, which still stands today on Lowell’s Merrimack Street.  The damage from that fire was contained to the top two stories of the Odd Fellow’s Block.  Just two days later, on January 11, an overheated smoke pipe in the boiler room of St. Patrick’s Church (the city’s first Catholic church, dating from 1853²) started a fire that quickly spread throughout the landmark church, and grew so large that it threatened the nearby St. Patrick’s Home, a five-story women’s boarding house and Notre Dame Academy, a day and boarding school for the daughters of the city’s mill workers, housed in another five-story brick building.  In the end, the boarding house and the Academy were saved, but the fire caused losses of $160,765³ and major damage to the church’s interior, which would not be completely rebuilt until two years later, in 1906. 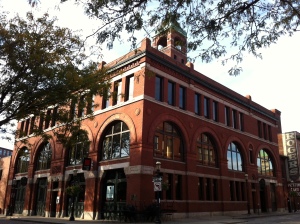 The worst fire, however, occurred on January 12, the night after the St. Patrick’s Church fire.  That fire resulted in an even larger loss of $161,422 and shut down one of the city’s largest department stores, O’Donnell & Gilbride.  The fire started late in the evening at the Fellows Block near the intersection of downtown Lowell’s Middle and Palmer Streets and quickly spread to three other large brick buildings on Middle, Palmer, and even Merrimack Streets.  Before it was extinguished four hours later, the fire threatened the Central Fire Station itself and even the entire downtown area.  Together, the three fires (all occurring prior to the middle of January) resulted in more than 80% of the city’s annual fire-related losses (4). 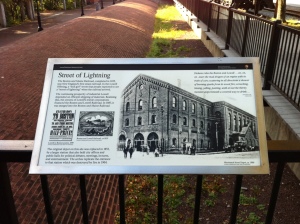 Although not the largest fire of 1904, the Huntington Hall blaze of November 6, 1904 left the longest-lasting scars on the downtown Lowell landscape.  Rebuilt from a previous fire of just seven years earlier, Huntington Hall was jointly owned by the Boston & Maine Railroad and the City.  Since 1853, Huntington Hall had served downtown Lowell as its main train station and public hall at the intersection of Merrimack and Dutton Streets.  The Hall was not rebuilt after the 1904 fire, but the arches that stand today in its place on Merrimack Street replicate the Hall’s first floor entrance to the train station, which was also known as the Merrimack Street Depot.

Over a series of posts during the next few weeks, I will be covering each of these fires in detail.  Each has its story to tell and, in the case of the Huntington Hall and Fellows Block fires, has left a lasting scar on the downtown Lowell landscape we see today.  The firemen fighting these blazes fought bravely and amid significant peril to their own lives.  Fire was an ever-present danger to our ancestors who were alive in the first years of the 20th century.  Stories have survived to show that citizens banded together to help each other through this fear, to escape the fires as they raged, and to recover from the losses they suffered.

1.  To put this in perspective, consider that today, Atlanta is the nation’s 40th largest city, with a population of 420,000.

2.  It should be noted that the original St. Patrick’s Church was built in Lowell, Massachusetts in 1831.  The stone structure that suffered the 1904 fire was constructed a generation later, in 1853.  It still stands today in Lowell’s Acre neighborhood.

4.  This excludes the damages caused by the Huntington Hall Fire, which occurred in November and was still being valued at the end of 1904.  The total valuation of that fire’s losses approximated $70,000.

11 thoughts on “The Grand Fires of 1904 – Lowell, Massachusetts and Fire’s Constant Threat”