On April 2, 2012, at 9 AM (EST), the National Archives will release the 1940 US census schedules at  http://1940census.archives.gov/.  The release, administered by The National Archives in partnership with archives.com, will mark the first time a census has been released online.  Site visitors will gain free access to view, search, print, and download the 1940 census schedules at the site.  The National Archives has already released a video on its YouTube channel providing information on the 1940 census, the archives’ preparations for its release, and instructions showing how to access the census after April 2:

Family tree historians have long scoured census records for basic information about their ancestors: names, approximate ages/birthplaces, and occupations.  Every ten years, since the first US federal census in 1790, the United States census has counted all individuals living in US homes.  The results are then used to determine the allocation of congressional seats and electoral votes.  The most recent census, the country’s 22nd, was executed in 2010.  The census is a requirement established by the US Constitution and is overseen by the United States Census Bureau.  Aggregated census data is available to the public soon after the census is taken.  The actual census records and data specific to individuals is withheld for 72 years.  The 1930 US census was released to the public in April 2002.  The 1940 census will be released next month.

The information collected by each census, as well as the questions asked for each, have varied over the years.  In the 1940 census, for the first time, enumerators asked respondents new questions to determine if they had worked for the CCC, WPA, or NYA (all components of President Roosevelt’s New Deal programs) in late March 1940, as well as how much annual income they had earned during 1939.  The census also asked married women, widows, and divorcees their age at their first marriage as well as if they had been married more than once.  Also, for the first time, enumerators were instructed to add an “x” after the name of the person who answered the enumerator’s questions.

Sen. Charles W. Tobey, was a vocal opponent of the 1940 census, more specifically, the inclusion of questions in the census asking for income information.  For the first time, this census asked respondents for information about their income.  Those opposing the collection of the information nearly succeeded in getting the question stricken from the instructions given to the enumerators.  In the end, though, as a compromise, the US government made available forms that people could mail in, if they did not want to provide the information to the enumerators.  The government published large numbers of the forms, but few were actually used.  Sen. Tobey was still not satisfied.  As late as census day, The Portsmouth Herald reported that he was still encouraging people not to answer the financial questions on the grounds that they invaded citizens’ privacy.

The census counted all people who were alive as of April 1, 1940 at 12:01 AM.  Babies born later on that day were not counted, while people who had died after 12:01 AM were.   The execution of the 1940 census was the largest yet, and included more questions than any of the prior censuses had before it.

As April 1940 began, approximately 120,000 enumerators descended upon the country to count each inhabitant.  Each enumerator had been provided a white, 4″x3″ identification card with a photograph and signature.  Unless respondents wanted to risk incurring a $100 fine, they were obligated to answer all questions, except for the ones regarding financial information, which could be mailed to the Census Bureau in Washington. 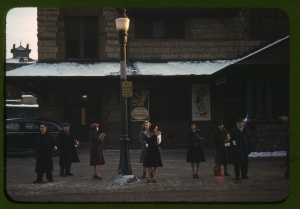 January 1941 - Commuters, who have just come off the train, waiting for the bus to go home, Lowell, Mass. (Courtesy of Library of Congress)

Locally, in Lowell, Massachusetts, fifty enumerators descended upon the city.  A newspaper article from the day before revealed some of the prevailing thoughts among the citizenry as they thought ahead to census day.  William Tully, the Lowell Sun reporter writing the article, noted that local women felt reluctant to give their ages to census enumerators.  Through interviews documented within the article, Tully spoke with various women.  One thought that certain facts should not be collected, like income, since it was already captured in the income tax returns.  She also thought collecting information about the amount of a mortgage on one’s home was unnecessary.

Another woman, who worked in the executive office of a large department store in downtown Lowell, replied:  “I know nothing about the census questions and I haven’t, as yet, looked into the matter.  As a rule, my husband knows more about these things than I do.” 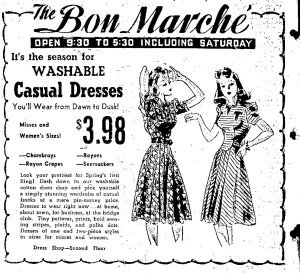 Another woman, a salesgirl in a local department store, replied:  “I’m not going to answer any questions about my age.  Oh, I suppose I’ll have to answer their old questions, but it won’t be cheerfully.”  When asked about the census questions:  ‘Has this women been married more than once?’  and ‘age at first marriage?’, she quipped:  “it’s none of their business.  And if you quote me on that, I’ll smash you.”

“What in the world is the government going to do with information like that?”  Another woman asked the reporter, who admitted he had no idea.  “Neither have I,” she continued, “and I think the whole thing is foolish.”

The US Census Bureau’s web site lists some interesting comparisons between life in 1940 and life today.  In 1940, for example, the average life expectancy was 61 years for men and 65 for women.  Today, the average life span has expanded some 15 years, with male life expectancies reaching 76 years and female life expectancies reaching 81.  Also, in 1940, nearly three in every four (73%) women over the age of 25 had not finished high school.  Today, only 14% in that group have not completed high school.

Family tree historians eagerly await the release of the 1940 census on April 2, 2012, at 9 AM (EST).  For many, it’s the first census in which they will find themselves or their parents.  It’s also the first census that will be released online for the public’s free access, either from the facilities of the National Archives or from the convenience of researchers’ homes.  Readers, what are you hoping to find in the 1940 census?  Where will you start looking?